Brought to you by ‘SalsaGente’ – Cuban-style Salsa dancing in Santa Cruz, California

A great film about human interactions and the uplifting power of Latin music and dance. A true story about Cuban salsa dancing, the film follows a dance group from Havana striving to win the national dance competition. This independent documentary was 6 years in the making and has received multiple awards. Music include Cuban salsa and timba, son, latin jazz, rumba, danzón, and a changui.

This is the first film to fully explore and explain Cuba’s de facto national dance, known as casino or “Cuban salsa” which appeared in Havana social clubs during the 1950’s. Step into a world filled with vibrant dancing, fascinating relationships, wonderful music and sumptuous Cuban imagery shot on location in Havana, Cuba. It’s an insider’s scoop on the contemporary salsa dance scene in Havana rarely seen outside of Cuba.

“This is the real Cuba, not a Hollywood version filled with narrow Cuban or Latino stereotypes. It’s an uplifting, crowd-pleasing film with a positive message.” 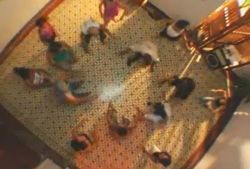 The heart of this film is a dance group from the Guanabacoa neighborhood at the edge of Havana. The dance group is led by creative genius and somewhat temperamental Albertico who sells meat during the day and runs his dance group by night. Albertico is accompanied by his beautiful girlfriend Yuneisy who fell for him after competing against his dance group. Other members include Jorge who dances with a suave style to seduce women on the dance floor, China the idealistic party-line elementary school teacher, Yosbany the dock worker who claims that dance is his religion, and eleven more members from the neighborhood. Meet the dancers in their homes and local hangouts. Hear what they have to say about their lives and the dance group. Then follow their joint effort – despite logistical and social challenges – to win on Cuban National TV. 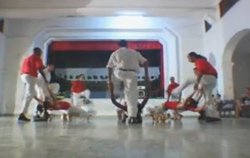 The history of Cuban salsa, known as casino in Cuba, and the group dance called rueda de casino or wheel of casino has never been told on film. Dive into the old Havana social clubs, Cuban music history, and the role of the Cuban Revolution – all discussed in the film by Cuban luminaries such as musician Adalberto Alvarez, radio personality Eduardo Rosillo, and dance scholar Graciela Chao. Dancers from previous generations tell their stories. These “founding dancers” talk about the early days of the dance and perform it in its original style. Historical footage of the 1950’s is included, so is footage from the Cuban popular dance TV Show Para Bailar Casino – a craze in Cuba. 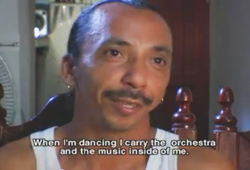 Between the storylines are the beaches, sugarcane juice stands, old plazas with children playing, and well-known buildings around Havana. Film-makers Eric Johnson and Sarita Streng are dancers and that comes out in the film. Director of Photography Alvaro Rangel’s style is up close and personal and the images are raw and refreshing. Narration is minimal so that the voices of the Cuban people can be heard. For anyone interested in dance, Cuba, or a culture rarely seen, this film is a must-see. 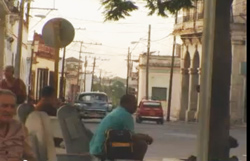 La Salsa Cubana taps into the immense musical heritage of Cuba. The soundtrack contains some of the all-time greats of Cuban music licensed from the catalogs of EGREM and BIS Music, the state-run music companies. All of the featured music is written and performed by Cuban musicians and has been recorded in Cuba. Featured genres of music include Cuban salsa and timba, son, latin jazz, rumba, danzón, and a changui from Guantanamo, the easternmost city of Cuba. 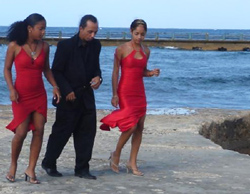 La Salsa Cubana took six years to make. In 2003, Director Eric Joseph Johnson quit his corporate job at Hewlett Packard to study dance and live in Cuba. Director Sarita Streng initiated the project in 2004. The film-makers obtained a rare license from the US Department of Treasury allowing a crew to travel to Cuba to make the film. A journalistic visa was provided by the Cuban Government. Both film makers Johnson and Streng teach rueda de casino in the US and their passion for the dance, connections and inside knowledge made the film possible. 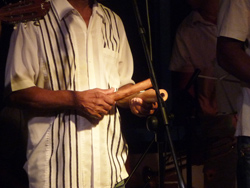 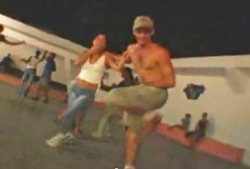